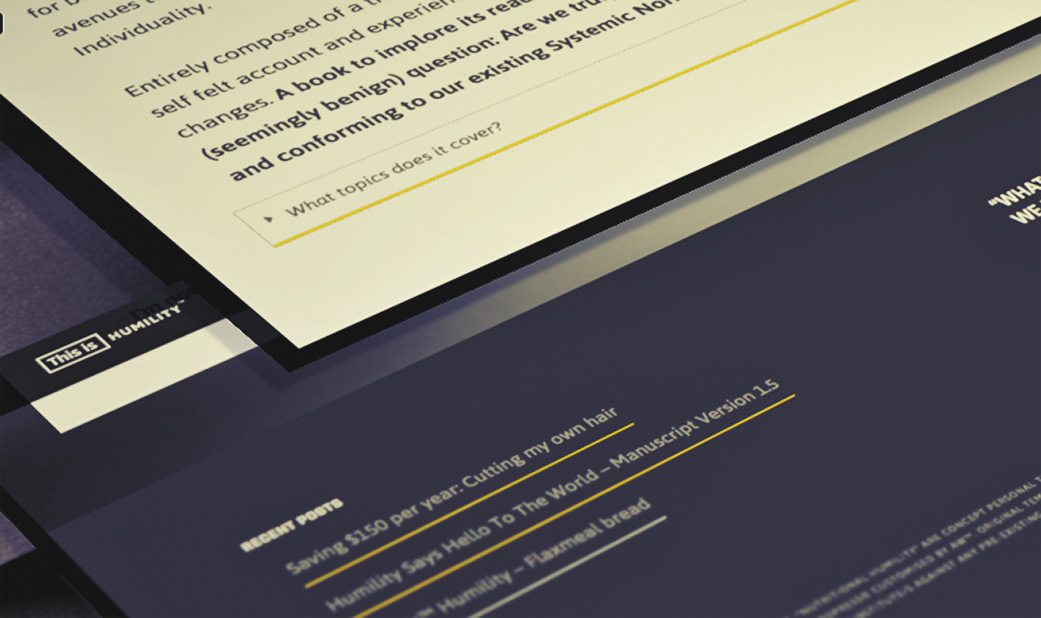 I must admit; throughout all my years as a creative. Little else frustrates me more than customising every bit of a web page design. Consider that my tagline being Multi-Disciplinary – that I am a Humility of many, yet a Master of none.

Whether it be (refreshing) my memory on how Inheritance Tag works in Cinema 4D’s Mograph to overcoming Apple Motion 5’s multiple parametric-rigging limitations with FCPX. All the way now to troubleshooting layers of code – still unaware how changing one line will affect a SERIES of anothers’ often without any hints of guidance how they relate from one to another. How one rule behaves, from one screen size to the next.

I would not be surprised if this impresses nobody – for the fact that it took me not mere hours but days alone without prior coding or development background.

I can only hope that these humble set of changes I’ve brought for this (the least visited sites of the world wide web) This Is™ Humility –  brings a renewed sense of faith amongst us few designers who knows how to tread that fine balance between non-coding pragmatism vs outcome based aesthetics / usability.

…If somewhat also – a hair pulling experience inbetween nights and days – in its process. With all this on top – alas, nobody would believe me that I am actually surviving (albeit just “able-to”) on multiple bouts of $25 LC+IF weekly budgets. INCLUDING carb re-feed days. Next write up on this would certainly be in order! 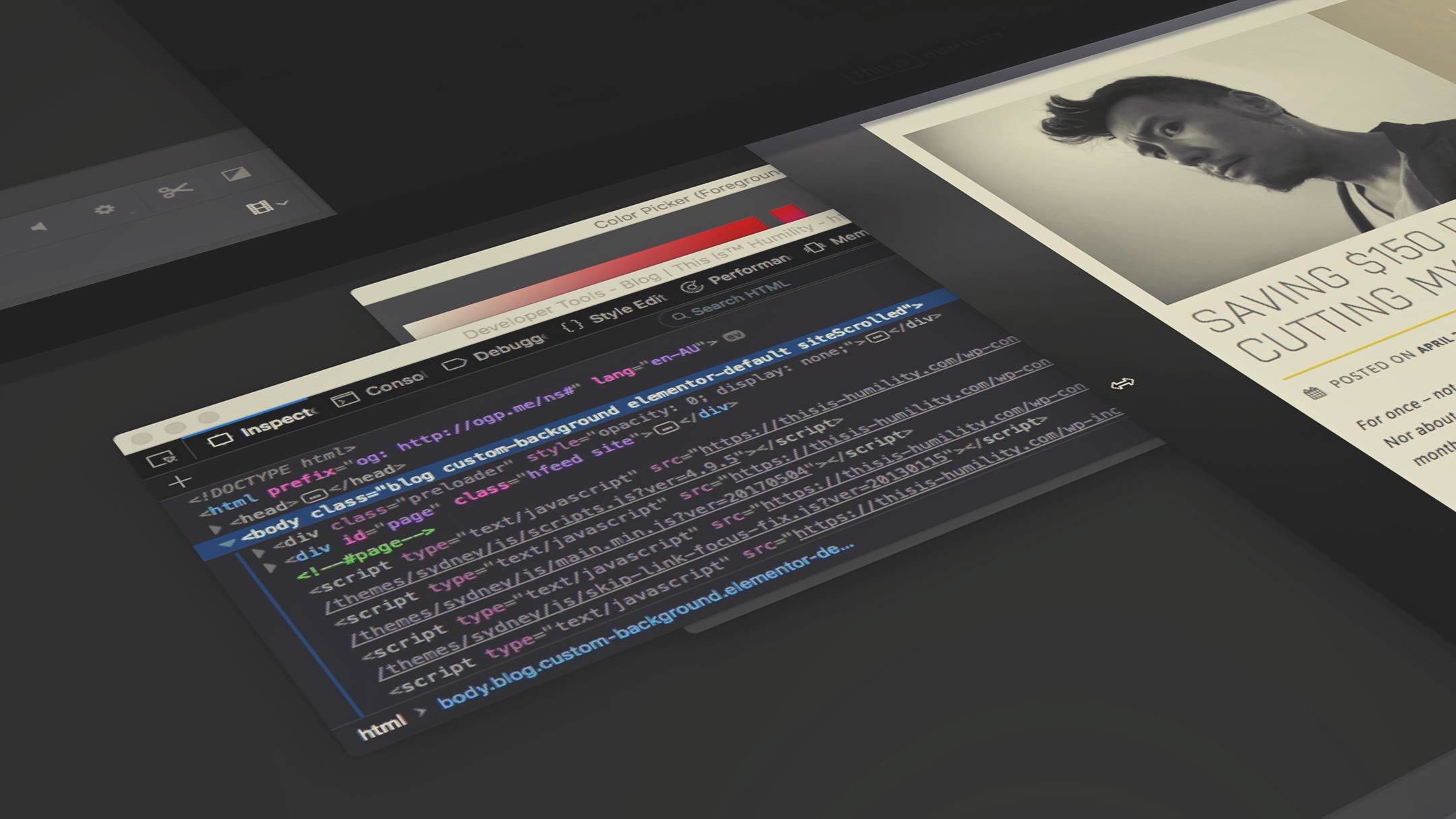 Emphasis on Typographic texturing and separations.

I am an advocate for prioritising typography as a “segregated logistics” away from other nearby elements. That is, by implementing a lot of margins and paddings on any readable content – away from surrounding pictures, images or any other visual elements.

More often than not, a lot of people demonise white space as wasteful, redundant evil. Strange to say that I do not call myself a “printer” biased graphic designer. But I still have a somewhat print-based mindset when it comes to typographic prioritisation (read: Legibility). Aia allowing white space; to comfortably revolve around each line’s leading and each paragraph’s texturing. Texturing – as in how each paragraph looks as a compositional feature as we read from top to bottom. Does it look as though it tries to be intrusive to its neighbours? Or does it look calm, peaceful or collected as though it sits happily on its own accord?

Thus, the biggest change you will see would be in reading my blog articles – is the expanded real estate canvas. No more “cramped-up” clogging around the headers and all of typography against tight or narrow canvases.

I have learned far more from remembering what my MOTION GRAPHICS (that’s right, not Advertising, or even Typography,  or Illustrator) lecturer – quoted this to me than any other books on typography, layouts and graphic design: “It is not what you draw. It is what you DO NOT draw that is important.” I find this hugely relevant to almost anything. From illustration to branding identities. From letterheads to (soul-draining) 200+ pages of annual reports. How you interpret is less upon what you put in, it is the effects it impose on everything else outside of it.

All this may seem visually simple. Yet required an intense re-coordination. Days if not week – of scrutiny and readings across multiple resolutions (both simulated and real devices).

I have learned much thus; thanks from my recently completed folio project (within Squarespace® platform) – on implementing @media screen set of CSS rules to devise a set of typographic scalability across a range of screen resolutions.That project alone took me nine days, and ninety (90) genuine hours of my own time. Just to prove my own humble mastery of none at front-end customisations within facing one limitation over another.

I really do care how typographic proportions look on larger and smaller screens. As well as how pleasingly isolated they are in relative to everything else. Legibility via dominance here is key as I design Responsive Set Rules towards larger screen resolutions.

You will witness; depending on what resolution you are in as the following changes:

Other small things help contribute to overall changes  – new underlining styles for hyperlinks, navigation menus’ font size  increased (on larger screen resolution viewing), more (and more) scrutinisation paragraphing space before’s and after’s (via margin-tops and bottoms) were explored. The Search sidebar is now more legible across all screen sizes. If you’re looking at my blog’s landing page at 4k resolution  – you will be presented not three but four columns; giving you a wider overview of content at a glance. 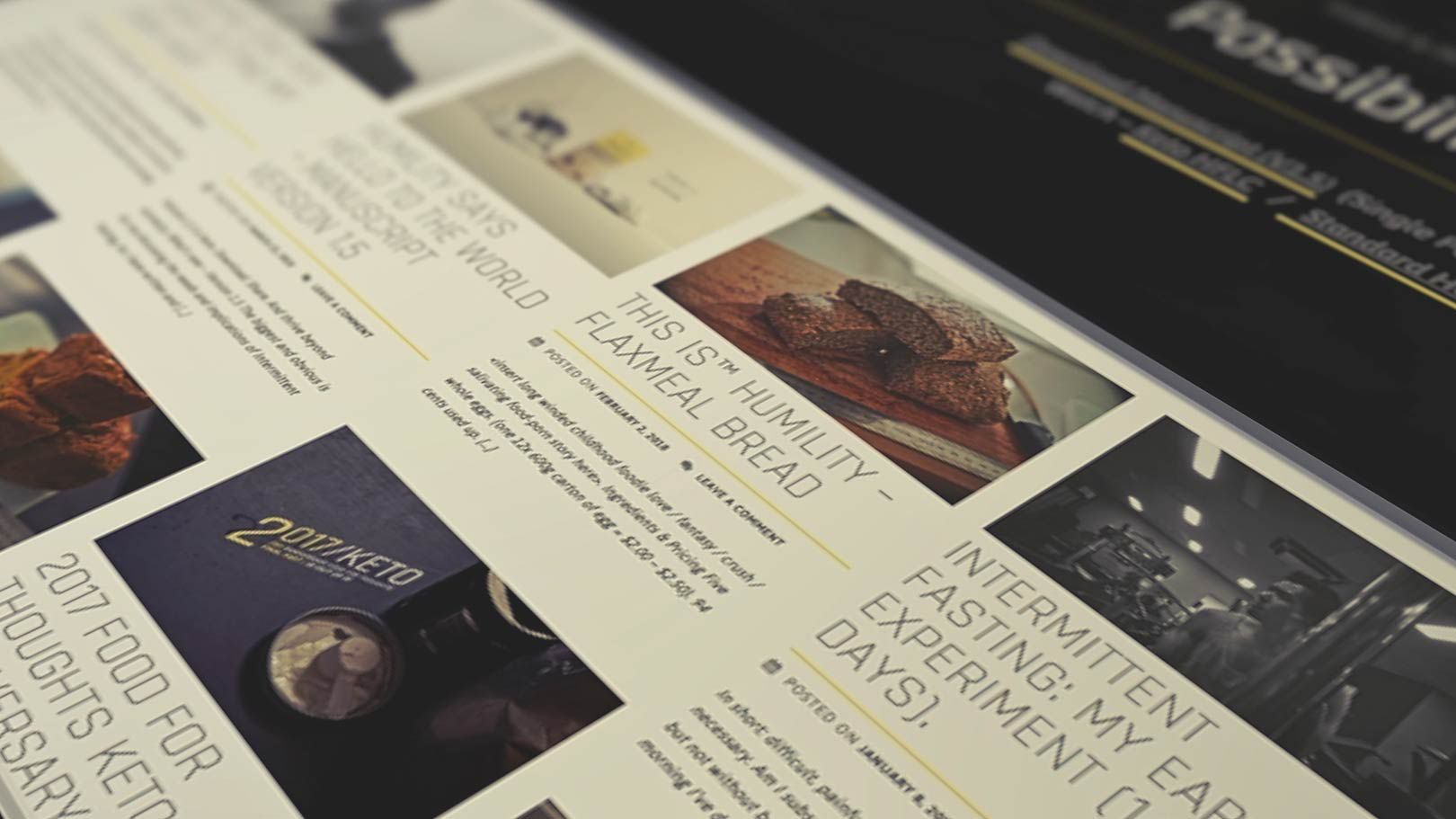 What are your thoughts? / Further help.

Little else; if any – frustrates me more than increasingly homogenous same-ness of the world wide web.

…But nothing more annoys me also – that out of some strange fetish towards visual elitism – web sites typography is getting lighter, thinner, “grey-er”, with icons getting lighter, and nimbler, and greyer all the same. Perhaps in the near future – everything will be a wash of gray. Because everyone wants to look sleek.

Sorry honey, just because everyone is “special” – then technically speaking – nobody – is special. First everyone wants parallax. Now everyone hates it. Next flat icons takes over, then everyone misses the messy drops of paints, dried acrylics and accidents. Boohoo! What’s next?

I actually am typing this on an inverted screen right now. Thank goodness for the Cmd+Ctrl+Opt+8 shortcut (on Mac, for Windows – you need to run Magnifier first before PC-only shortcut Ctrl+Alt+I can work).

None of these attempts are of course – developer’s friendly approved nor me getting any stamps of approvals for landing a job as a Front-End developer. Heck, you developers may even call these mere “attempts” as hopelessly pathetic.

My passion as a designer remain diverse. I am my own resilient diversity as my Humble authenticity.

I cannot and will not – sacrifice my other diversities just for the sake of fulfilling one industrialised tagline. Be it “Illustrator”. “Typesetter”. Or “Operator”, or  “Coder”.

Why? Because I refuse to be institutionalised to homogeously “fit” into one career, or one fixed peg of a shape for anyone assuming my role to society. I am no square or triangle.

I am a sphere but never – a polygon.

Please let me know of your comments and thoughts below on these above mentioned changes to the site.