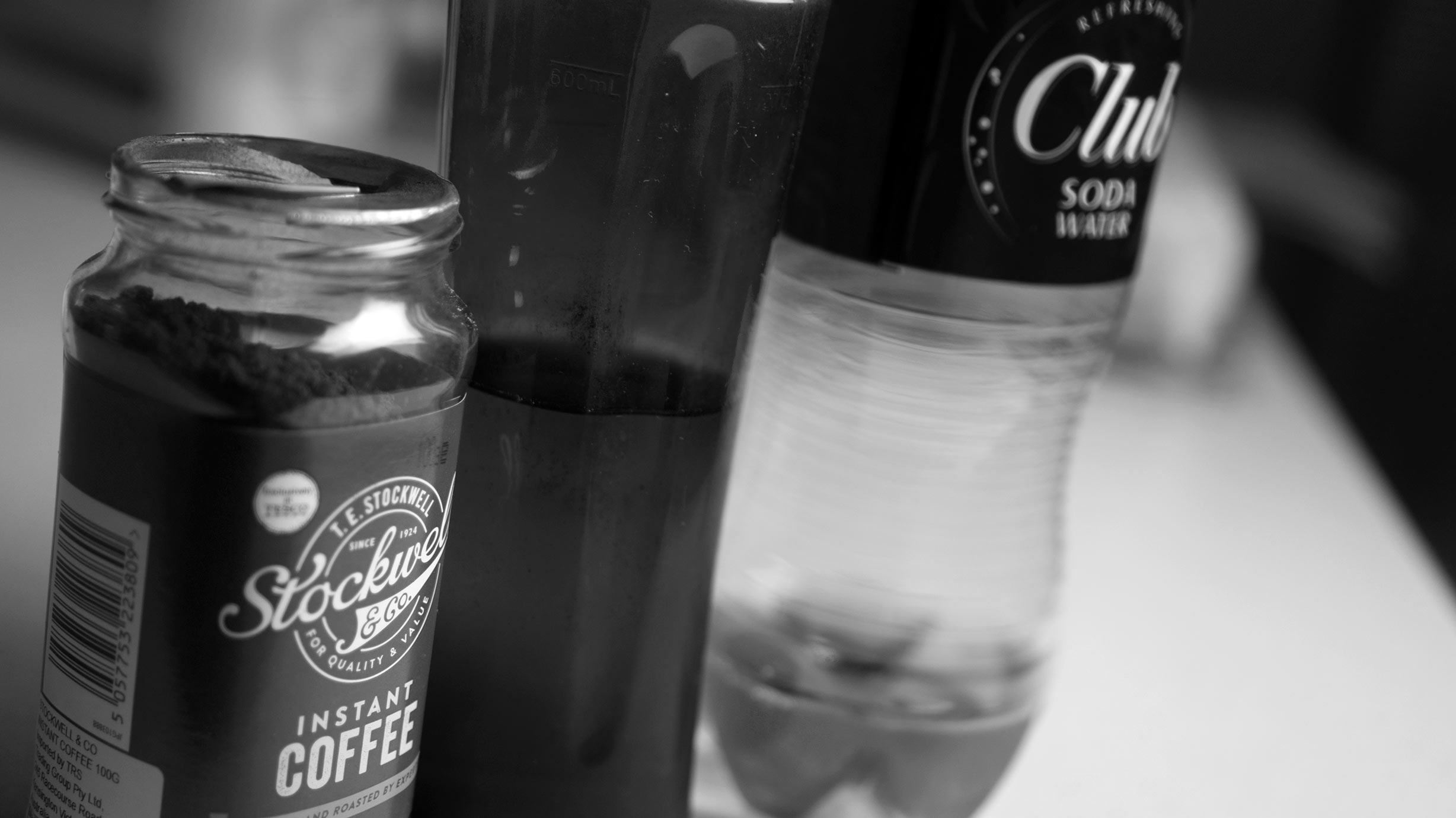 “Do we really need pre/intra/post supplements?”

Eventually yes. But this, as with any reductionism challenge ~ is worth trying.

Throughout winters and nearing end of 2021 – here are my own experiences following minimal to absolute “frugal” training supplement conditions. One reason behind all this is simply me contemplating to try living with less inputs; whilst maintaining training volume. To briefly reiterate – think 200+ repetitions, time under tensions, 6-7 of 10 on the RPE scale, and <one minute resting times.

Possible? Yes. Sustainable? Maybe. Forever? Absolutely not. Instead of lengthy dissertations I instead present each specific usage / elimination case as their very own self-contained section(s):

By no means all this is suggestive or immediately applicable to everyone. Certainly not those who are new to fitness training. Learn for yourself, keep for yourself. Live-it-forward, AW.

I believe there are outliers and exceptions to every rules. Hence so called “non-responders” surrounding creatine use still to this day remains a mystery.

Whether or not genetics have much to contribute is certainly up to debate. Martin Berkhan, the prolific lifter and founder of Lean Gains/16:8 IF Method claimed he is a non-responder himself.

All proclaimed benefits seems to be largely carbohydrate-intake dependent (McDonald, L. 1998) &  (Roberts, AP et al. 2016). Evidences suggest it needs a strong enough insulin response for uptake (Theodorou SA et al. 2017) & (Steenge RG, et al.1985). Considering 90% of all my training sessions are done during LCIF, on a deficit, and at-least on semi fasted (upon intake of minimal ergogenics as shared here in this writeup) ~ altogether raise the question whether creatine is actually worth it.

So from months cycling on/off between none to maintenance intake <20g per week ~ I concluded that my lifts and training records were not that much different. But a more important marker to assess, in my humble opinion – is the overall difficulty, compensations required, connective tissue resilience etc. It was difficult at distinguishing any significant differences.

This does not mean I am downplaying Creatine’s importance, quite the contrary.

Despite Creatine’s importance to human health dozens upon dozens of studies dedicated to it as ergogenic, what is the worst that can happen for one to go without it? In my case – I survived day in, day out. But all mileages, may vary.

Similar to adrenaline rush or runner’s high (those who follow Ray Peat will of course frown at this) – I interpreted these experiences as a “cleaner feeling” workout. But of course training metrics does suffer. But how much are we talking about? In practical terms ¬ insignificant. The worst I can expect (and have gotten over it day in & out) is missing one or two exercise(s) off highest maintainance total (9+ exercise per training day). But what I find ironically from omitting one or two regular exercises – my mind wavers into trying out exercises I have years neglected for.

Hence, this appeared doable, though not without its caution. In summer days with lots of sweat as signs of mineral losses would highly be inadvisable. 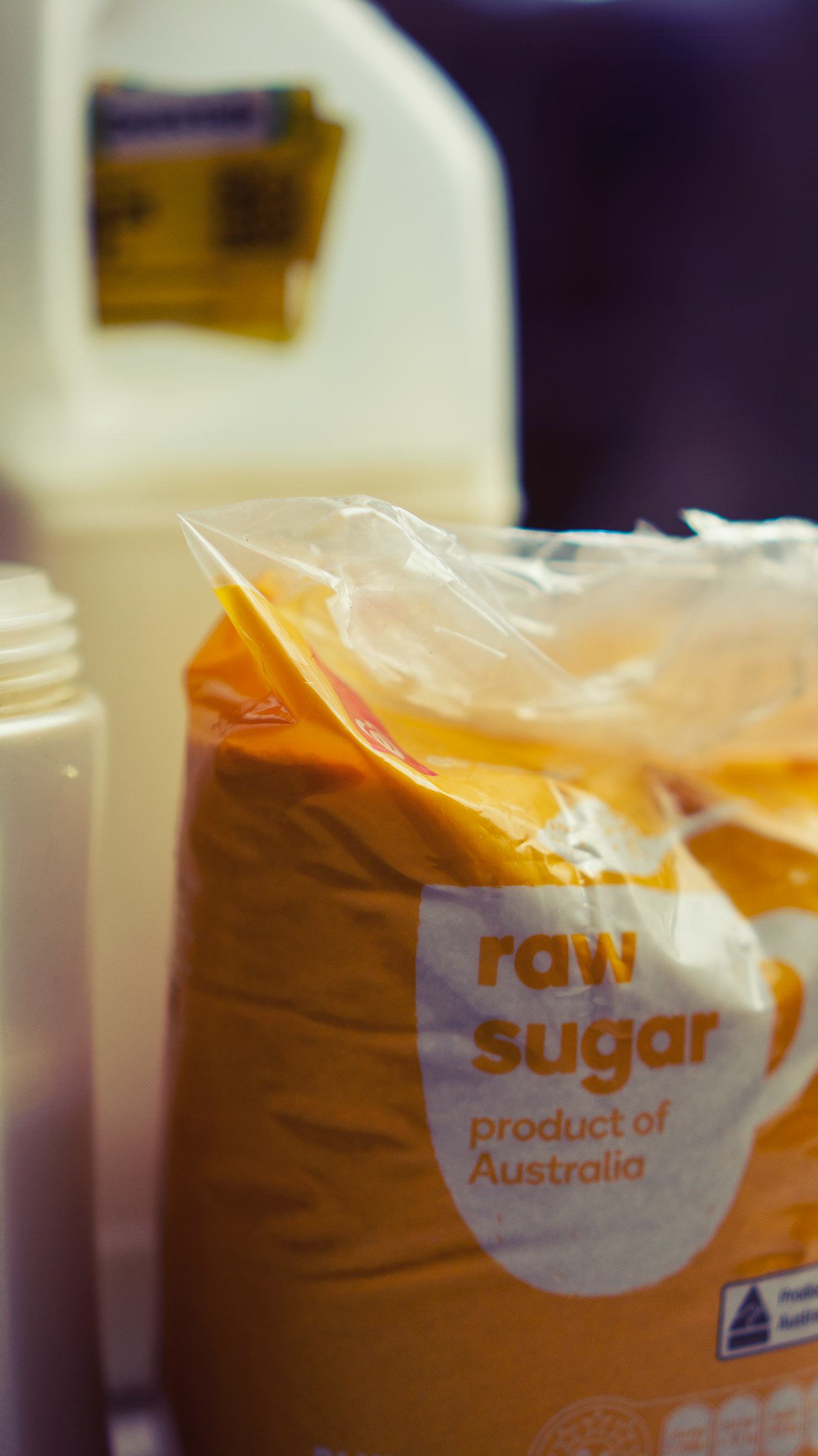 This is more accessible and surprisingly sustainable ~ experience.

This involves no more than 150ML full cream or hilo milk, diluted with a little bit extra water, and two teaspoon of brown sugar.

Taken as post workout as well as frugal breaking the LCIF’s 20+ Hour fasts; I felt fine just the same were I to return to old ritual of scoops of whey or pea proteins.

<90 kcals. Certainly not a “proper” post workout drink. But considering how humble it is – I consider this acceptable. Given that there are refeed days ahead anyway.

In addition to this is a need for Vitamin D which I feel is warranted. Agree or disagree; Vitamin D next to overall adequate protein intakes remains paramount for everyday sustenance. I tried subsisting with and without Vitamin D on winter for months on end due to my previous year’s very high / borderline Hypervitaminosis D readings. This abstinence certainly did not, however for reasons I cannot explain – improved my physiological and psychological sense of wellbeing. If anything – I felt worse  in all  QOL / Quality of Markers as general malaise both psychological and physiological.

Nonetheless I believe milk+sugar method pleasantly surprised me in ways I did not expect. But certainly not as luxuriously fulfilling or meaningful as that of standard scoop of WPC/WPI. 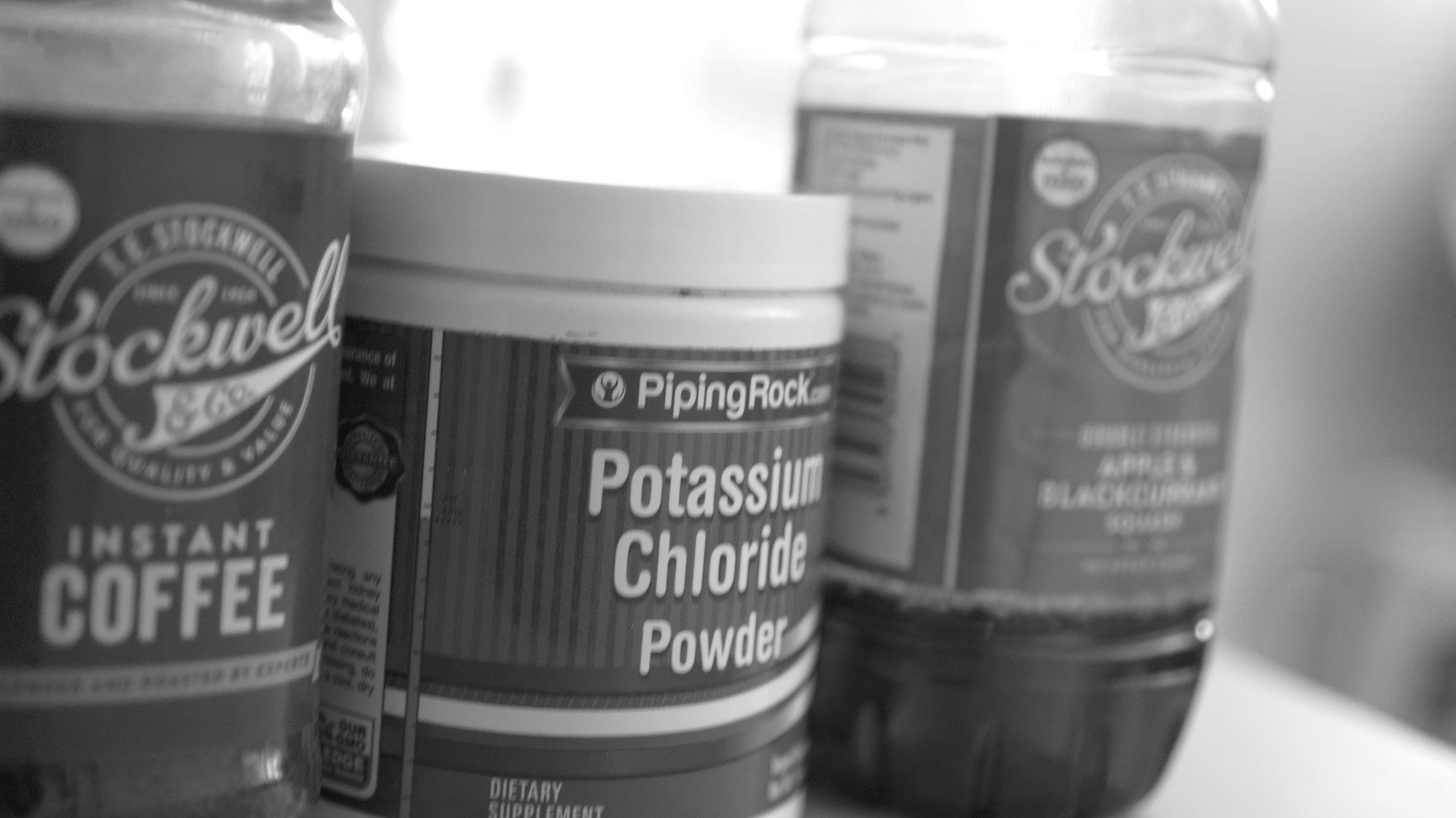 Why Potassium Chloride? Just one (1) purchase of a 500g tub last for at least a year. One investment that goes extremely long lasting hence valid enough for frugal testing considering potassium’s general essentiality as key electrolyte.

Results were interesting. In just the right amount in frugal pre-workout (as pictured above = instant coffee, reconstituted soda) ~ KCL / Potassium Chloride finger pinch amounting to 1/4 tsps ~ many times convinced me with better all around training experience than without it. Mind to muscle connection. Better coordinations. Also just as importantly ~ outside of training ¬ mixed in with green tea helps me maintain psychological and focus composure, amidst cold job interviews. Obviously, not as meaningful as ALCAR (Acetylated – L Carnitine), but at least what I consider essential in any prolonged low carbohydrate formatting with intermittent fasting on top.

Cons? Lower than ideal blood pressure. Weak pulsations in the heart. Both Potassium deficiency and overdose can share same symptoms hence warranting several cautions. My own experiences tell me there seems to be very fine line between optimal and overdose. If taken large enough, which I equate that as beyond RDI of 4.7 grams per day (which  already seems a lot) – I do experience some of the above symptoms. Also, amidst cooler seasons ~ I am noticing more frequent gut discomforts during fasting windows bad enough that I had to forego / off-periodisation from it for quite some.

I would say KCL as hypothetical “ergogenic” does work, though only as indirect support. Tinkering with higher levels would not be wise, in my opinion.

The spoiler alert (Almost) here refers to perhaps the most debated accessible supplement in history. Aspirin.

Whilst I can only share my own N=1, I do at times agree that no it’s not an “ergogenic” to magically improve training metrics. But at least – it helps me feeling at ‘ease’.

There are evidences suggesting its anti-cortisol effect in response to physiological stress  (Watson, S et al 2009) and in context of exercise (Luigi DL et al. 2007). However keep in mind Aspirin and NSAIDs in general remains an endlessly skeptical debate on whether or not it is supportive as an ergogenic.

I am open to be wrong because Aspirin is not without its repercussions. As there are clearly mixed sentiments, both good and bad (Li, Z. 2020 et al.)  . Ranging from (surprisingly) GI cancer, liver health particularly NAFLD (Shen, H. et al. 2014) to name a few.

Irrespective ~ risks vs rewards and beyond ~ all remains up to individual tinkering and experimentation. Those who seek further reading on Aspirin would be wise spending time browsing through the articles of Dr. Ray Peat and the dedicated forum .

Zip. Zero. Absolutely nothing as post workout. Nothing to break the fast other than straight solid LCIF meal as per schedule.

I’ve long suggested in the manuscript at least something that need not be calorific ¬ would assist  digestion, especially after a fast. Increasing salt and potassium helped, but detracts from enjoying the food. However, adding some amounts of yoghurt does lend to more comfortable eating episode;  perhaps attributed by Calcium at supporting digestion.

Hence, in short I would say “no” – going absolutely nothing prior to any solid meal, or after fasted training session is not advisable. But my case is my own case. Yours may differ. 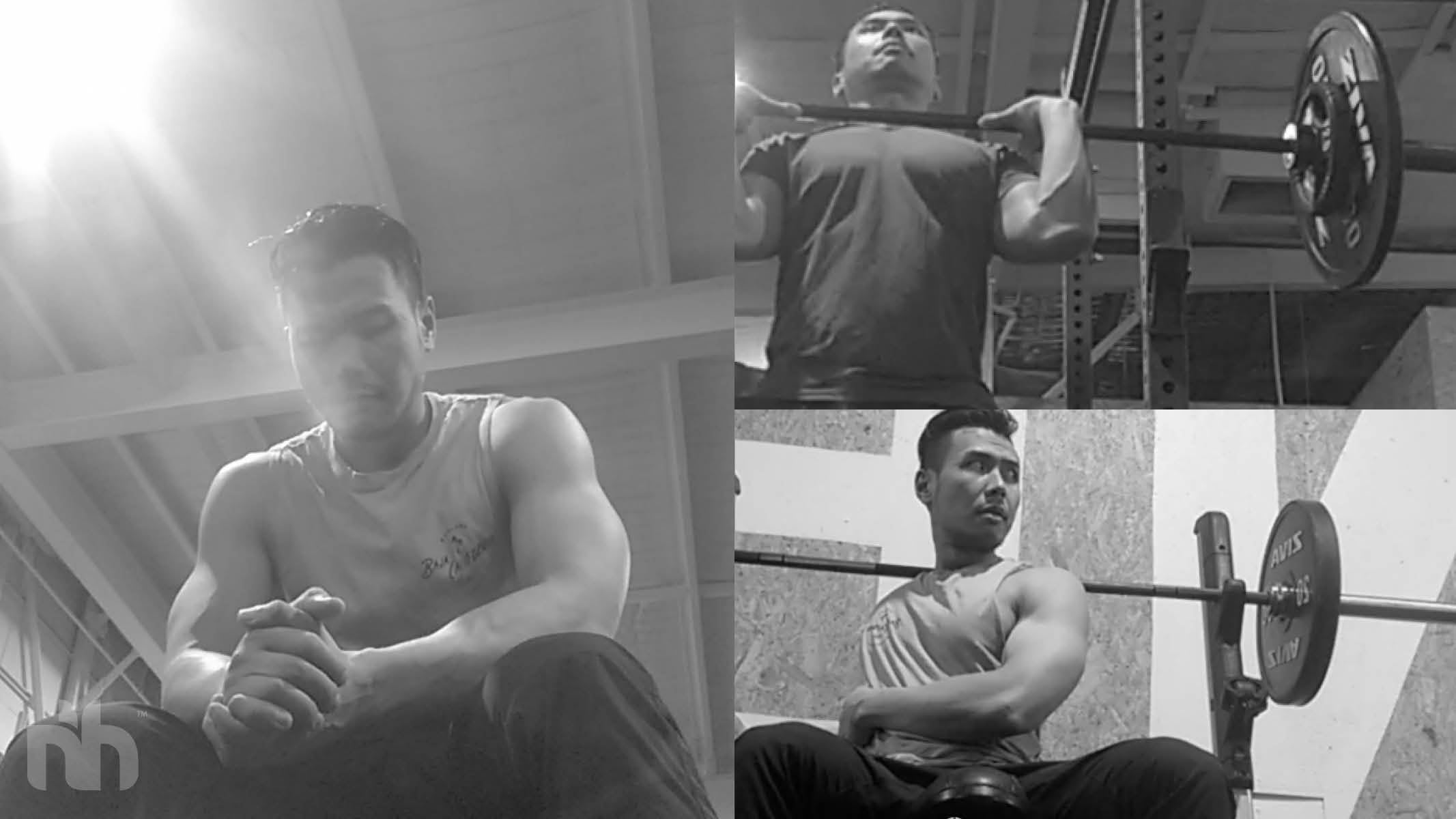 This is an experience worth trying. Month(s) to this day, I am still practicing many of the above in various combinations.

Technically speaking, any “aid” includes anything of “food”. Hence,  we are already “cheating” so to speak. All this debate surrounding “minimalism / health purism” may only work so far as simply that of “faith”. But have “faith” on what? Until compensations set in. That is where inevitably one way or another – any exclusion will necessitate reinclusion. It is a matter of when not if.

As I’m writing this, I am by no means anti supplementations. Notropics or notably that as ALCAR (Acetylated – L Carnitine); as I’ve written in the past remains valuable for their support against excess outside stressors; be it sociological pressure, humiliations, coercions, condescends  anxieties and apprehensions. Whey proteins still in my Annual Food for thoughts remain conditionally essential and more fulfilling during depraved days. Creatine ~ despite my conviction as neither supremely beneficial nor necessary – nevertheless constitutes prime importance to methylation.

Be yourself, authenticate, repeat. Raise your own bar. Scarcity for now. Abundance for later.

So what are your thoughts surrounding our ingrained dogma on exercise supplements? Does the above speak the same to you and your’s experience? Let me know down in the comments below. AW.