This is a big day of yet another change.

Frantic, exhausting, yet potentially another necessary grind for this concept initiative much needed branding evolution.

I have decided to now welcome you all the new titling of the parent manuscript. Nutritional Humility™.

Why the change of name to “Nutritional Humility”?

It has come to my attention, that despite many years passed, the former book’s title (This Is™ Humility Through Frugality) somewhat holds residual grudges for inaccessibility and usability concerns.

So here are the reasons why I have decided to now use the NH™ as the official title to replace the former, from here onwards.

“This Is™ Humility Through Frugality”; whether as a branding name or a book’s title if spoken out, shared or written – has been under my suspicion that it can be somewhat “laborious” and cumbersome.

Trying to come up with unique branding titles remains a VERY DIFFICULT task amongst all designers or entrepreneurs. But a greater challenge is to somehow find any name, or branding title concise enough for people to be able to relate to; without it being so encumbering.

“Go wide, then deep / more specific” – has been my pragmatic way strategies for brands that feature various sub-derivatives. So far, the last (nearing five) years of counting – This Is™ as its “mother” or parent branding initiative acts as the parenting “anchor” to potentially many sub-relative projects. For instance, I can call any subprojects as = This Is™ “Authenticity”, This Is™ “Resilience” / Stoicism / Pragmatism… so on and so forth. Hence, “This Is™” as the parent concept brand – are likely to remain as they are for quite some time. At least until my convictions are yet to change in due course.

The NH Icon branding to coincide with my recent conceptual acronyms of “PAIR” and/or “FAIR”.

Within recent revision release since Version 1.75x I have introduced the conceptual abbreviations “PAIR” and/or “FAIR”; expanded as  Frugality/Privacy/Primal Admissions, then followed by: Authenticity, Individuality and Resilience.

The pronunciation of PAIR is to seemingly coincide to that as “pear“; hence resembling that of a “fruit”. This again – compartmentalising the very visual icon design of Nutritional Humility™.

Nevertheless the philosophy and design rationale of Nutritional Humility™; as I have published in Behance® remains unchanged to this day as they are. Including the logo animation.

To reiterate to those new and/or unfamiliar, I have chosen the shape juxtaposition inbetween that of the “Apple” and the flicking of the “Book” – to narrate that “Science” is a progressive, open “book” – of variable interpretations. The Apple marks as both saviour and condemnation to the devourer, the pre-dator, the eater and the consumer.

The book flicking animation as featured in the Behance® presentation = is reminder that we – as animals belonging to the mammalian kingdom – are  “animated” being/s. After all, motion potentiates evolution. Without movement, there is no life. There is no memoirs. Hence we have evolved much through time and consequently to that of surviving against each and every forces of entropy. Each time we invented ourselves various imprintings – inks and dyes from the animals’, we have been leaving ourselves “imprints” and/or marks since our ancestors left as various account/s. For others to then observe and witness as “lessons” of reminder. Beyond history, but to progressively embrace and advance science through creativity.

Hence, my rationale behind the juxtaposition of the letters “NH”, then coinciding that to the form of the alluring fruit (the Apple) –  are to reminds us all of our prior wise “sapience”. Followed by “Humility” – as derived not entirely out of collectivism of binary “faith”, but of scientific reconciling of our thrift genomes at partitioning what “enough” means. 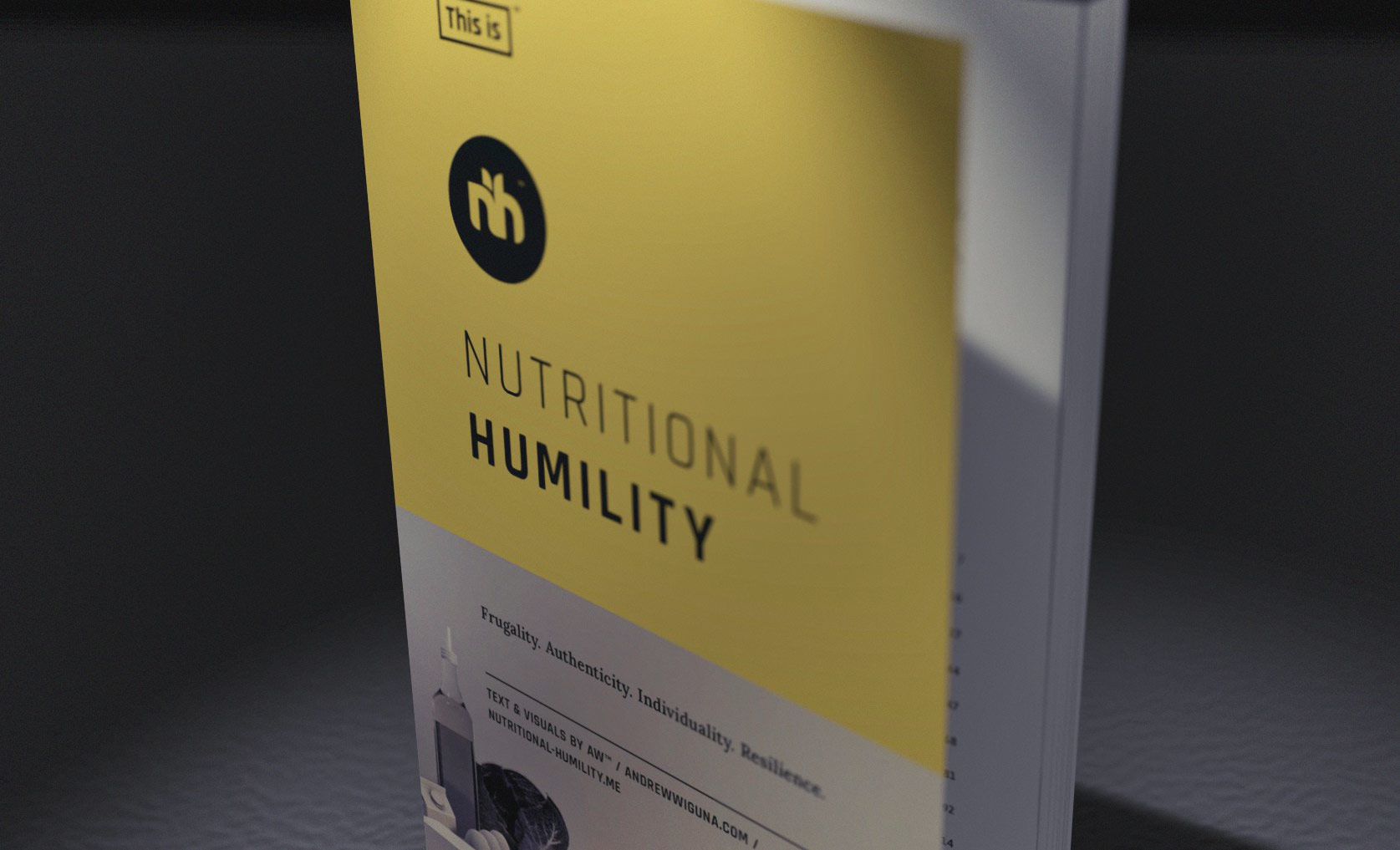 This has been going on for somewhat too long of dilemma. “Frugality” is certainly neither jolly or celebration. But neither is it as terminally dark or suicidal as that of “nihilism” itself. Why? Because it remains nonetheless a pragmatic messaging for “self–survival“, stoicism and a potentiating marker for discipline. Yet it is also begrudgingly prone to that – of almost preachingly “self-punishment” to the point of masochism.

Well, true and no doubt; as per whatever this book’s deeply array of controversial methodologies. After all, “Comfort” isn’t the notion of this book for five years strong (and counting). The question that remains however, is how to challenge this notions of “Comfort” somehow in a civil, composed and succinct manner. Hence, one of many skills in Graphic Design or psychology is that of coordinating chaos in assumed visual linguistics. That – is a skill that cannot ever be “tangibly” taught nor “engineered”.

It has come to my attention now therefore – that I hereby apologise…. such a long-winded title “Humility Through Frugality” does hint of somewhat overly aggressive, “virtue-signalling”.

“Nutritional Humility™” on the other hand I believe is far better at exuding some surface elements of both mystery and unassuming anticipation of some sort of “science”. By adding – “al” in front nutrition – implies that there is something juxtaposed as a scientific hypothesis awaiting to be read. Awaiting to be understood. And awaiting to be reconciled for its readers.

….now compare that to “This Is Humility Through Frugality”…..I am increasingly convinced more than ever now – that it is too frank of a harsh, and bleak –  preachery give-away.

At least, for quite some time – keeping it to as few word(s) as possible I believe “works”. 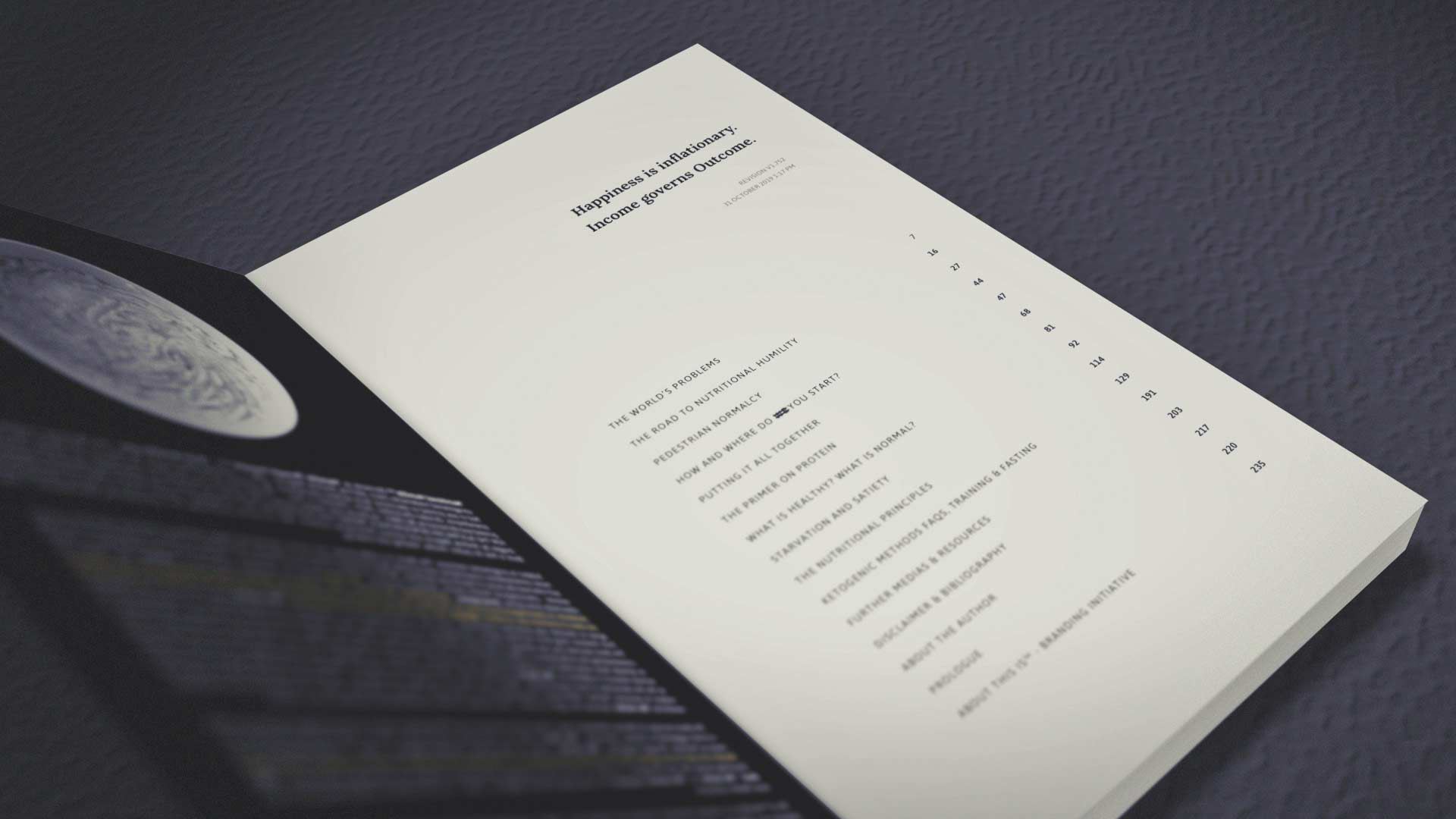 Web design updates, various official descriptions on Start Here have already been under way of this change.

Now…as per to the video dissertation projects?…All I can say is…”When it’s done”.

Bleary eyed and exhausted as I am at changing and updating all collateral/s, I hereby wish that this update is genuinely nonetheless as that of a pragmatic, much-needed – improvement. Comment your thoughts below.