In my previous write up I was increasingly left without a choice – resorting back to use TVP once again into my diet. Despite its’ nearing two years of dry storage expiration date I’ve decided to write up a series of methods on how to prepare & marinate them towards basic feature meals.

But…Why I am still eating this?

Good question. Who would dare eating dried, wholefood-like products  beyond its expiry date? I could try “donating” it as perishable foods, but I’d be sued to the court for perpetuating food poisoning. Hard to imagine Salvo’s or Good Sammys be handing out 2-years expired food products. Yet alone them knowing how to prep it.

My intent to intermittently revert back to my Keto Quasi-Vegan day/s is not out of mere “ethical” or “emotional” or “moral” choice. Although my opinion still stands unchanged in recent years ~ I do not recommend TVP for prolonged consumption to REPLACE meat proteins.

Nonetheless, to remain fair and just towards all food “-isms” – this article shares various methodologies to help reduce the excess “processed” aroma and palate whom many are familiar with such meat replacement products.

Further also to a degree (though not completely) helps eradicate the adverse, accumulative side effects of TVP consumption as I wrote in my book.

A decision thus hangs in the balance between keeping a roof over my head or paying another entity called “Lawyers” for likely leaving me nothing but a cardboard box. Between this, lies an alternative food source; half of its supply already dismissed (discarded due to its expiry), and another half awaiting its fate despite its obsolescence.

Hence, my pride swallowed, head down – I gave it another go and resort my life to it once again.

Before we get to see all the marinating options, all reconstitution steps must be followed as below. 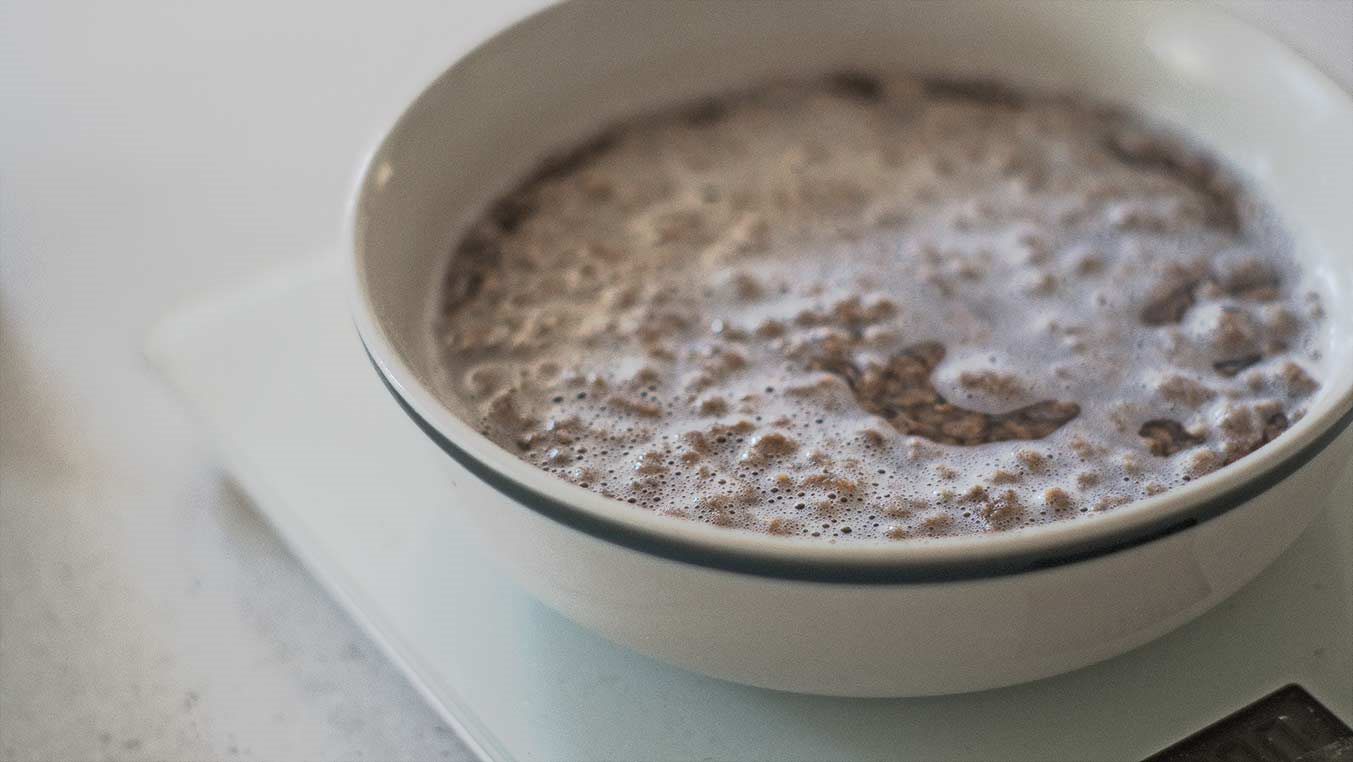 1/2 Weigh, and pour in boiling water
Firstly, weigh together 60 grams (g) of dried TVP granules / originally dried chunks. Bring the kettle to a boil. And pour over on it all just until covers enough to submerge the TVP. More water may constitute greater volume, but this only brings water content not nutritional content. Then leave it to stand, allowing the granules to soak up hence “reconstituted” to approximately 40-50% increased in overall yield size.

That first step is, accordingly to the USA food emergency supply – is all that it takes to prep TVP – theoretically ready to eat within five to eight minutes. The overall 60 grams should more or less result in about 230 grams of initial reconstituted size. However this gives off a notoriously-processed palate & after-taste which I simply do not recommend. We’ll take it few steps further by straining it further with boiling water again. 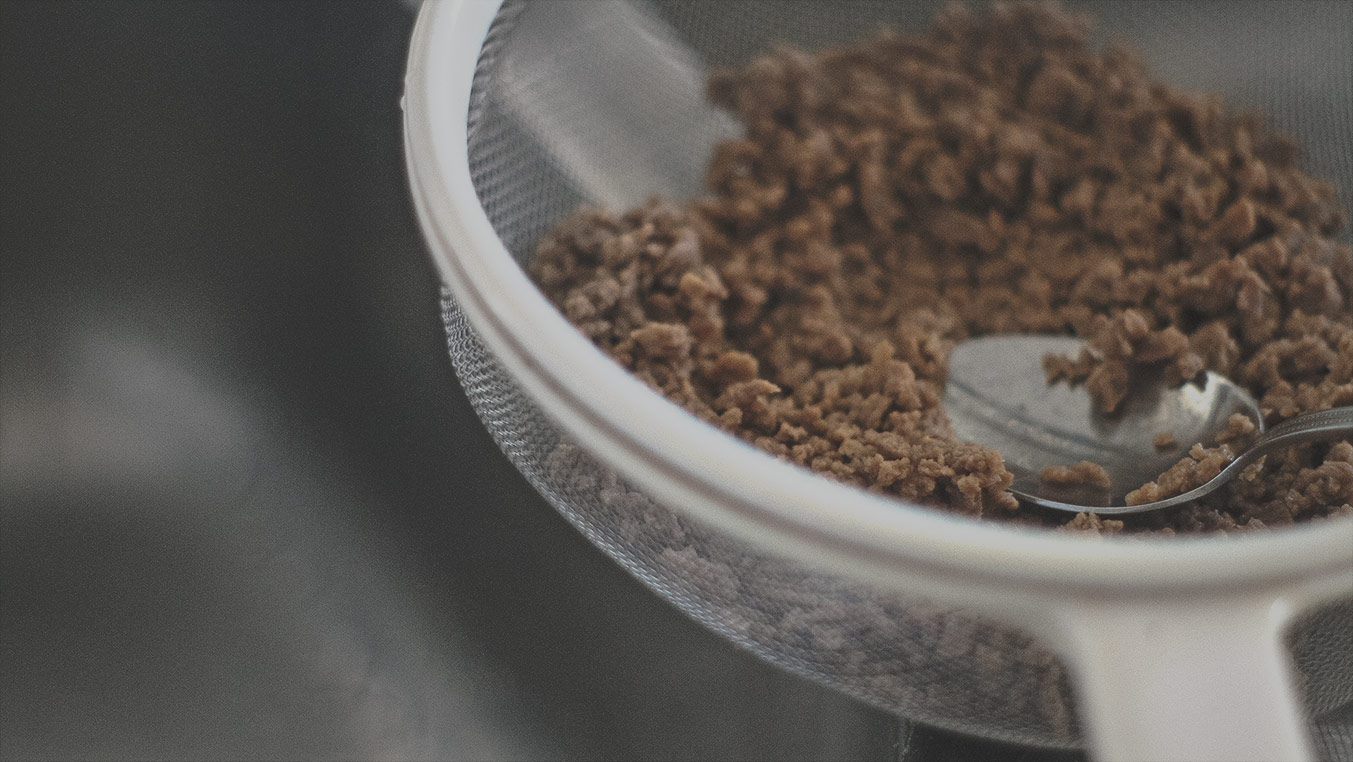 2/2 Strain with boiling water
Using spoon and mesh strain – push down squeezing out as much water as possible. You do not need to be doing any more than few push downs. From about two to three minutes of draining – the final weight from 220 grams of reconstituted size should be reduced to anywhere between 180 to 200 grams.

Now then, the fun begins. Choose your marinating options. Then fridge it (at least few hours or overnight). Reheat briefly then serve.

Pour in just enough milk (full cream please) about 60-80ML amount. Add in a teaspoon full of yoghurt. Mix in your spice seasoning (my one year old – bulk bought Kakulas’ lemon peppers seasoning works wonders). Why milk and yoghurt? I am somewhat inspired by various post/s drenching chicken livers in milk. I have no idea whether this alter the nutritional macros. But at least it helps quell that lingering, “processed” taste.

I would not recommend however in combining Apple Cider Vinegar with the yoghurt as the acids may be detriment to the good bacterial composition during marinating. 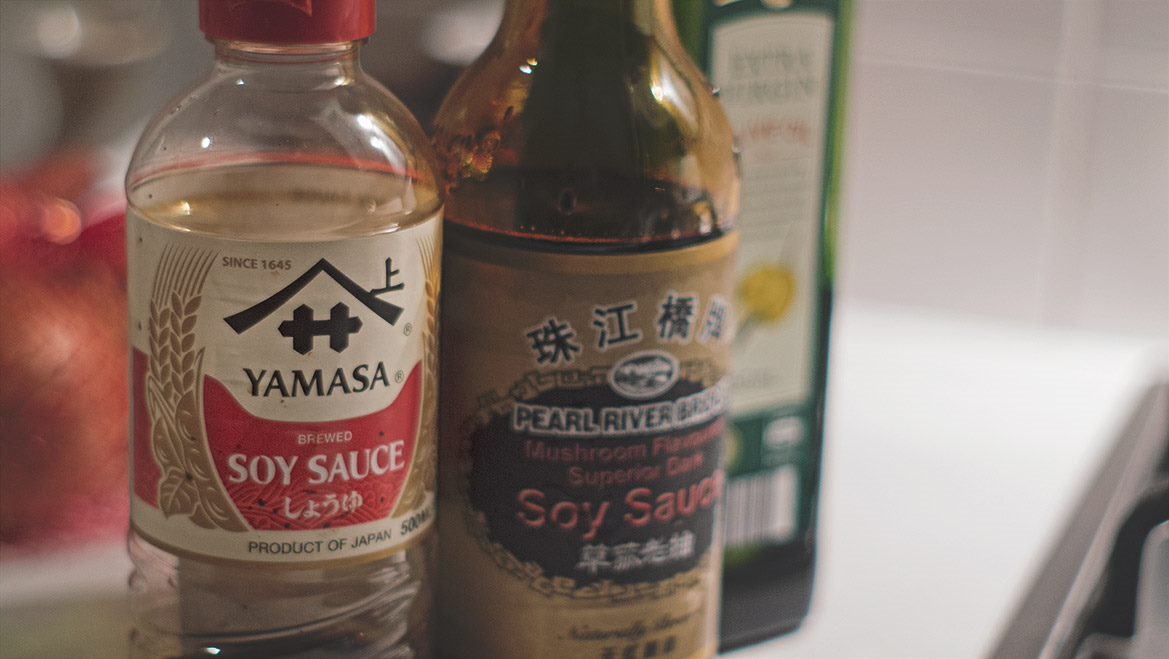 When you’ve run out of milk after your refeed days or that you’ve used it all up during post workout shakes during HC or LC+IF – soy sauce remains a viable option. The challenge here is cost and choice of brand – Kikkoman convinced me as the first “benchmark” for all soy sauce, although Yamasa’s Japanese style comes close as second, then “Pearl River” dark soy sauce as third (however it does contains bit of carbs per 20ML). Alas, Pearl River is the most affordable of all three. For as long as the label bears no added MSG (disguised as flavour enhancers #600 series), nor added synthetic colouring (TVP is already artifically-coloured) – then you’re good to go.

Add a tablespoon of soy sauce alongside with ginger or minced garlic (watch out for carbs though)  to the reconstituted TVP. After marinating you can certainly then heat this towards any meals. Beware however, that the longer you marinate using soy sauce – the sharper its saltiness will result. Hence, my experience suggests when things are marinated-too-long this way – it may be too strong tasting to the point of tasting nothing but very salty chunks of faux meat. Not so palatable. 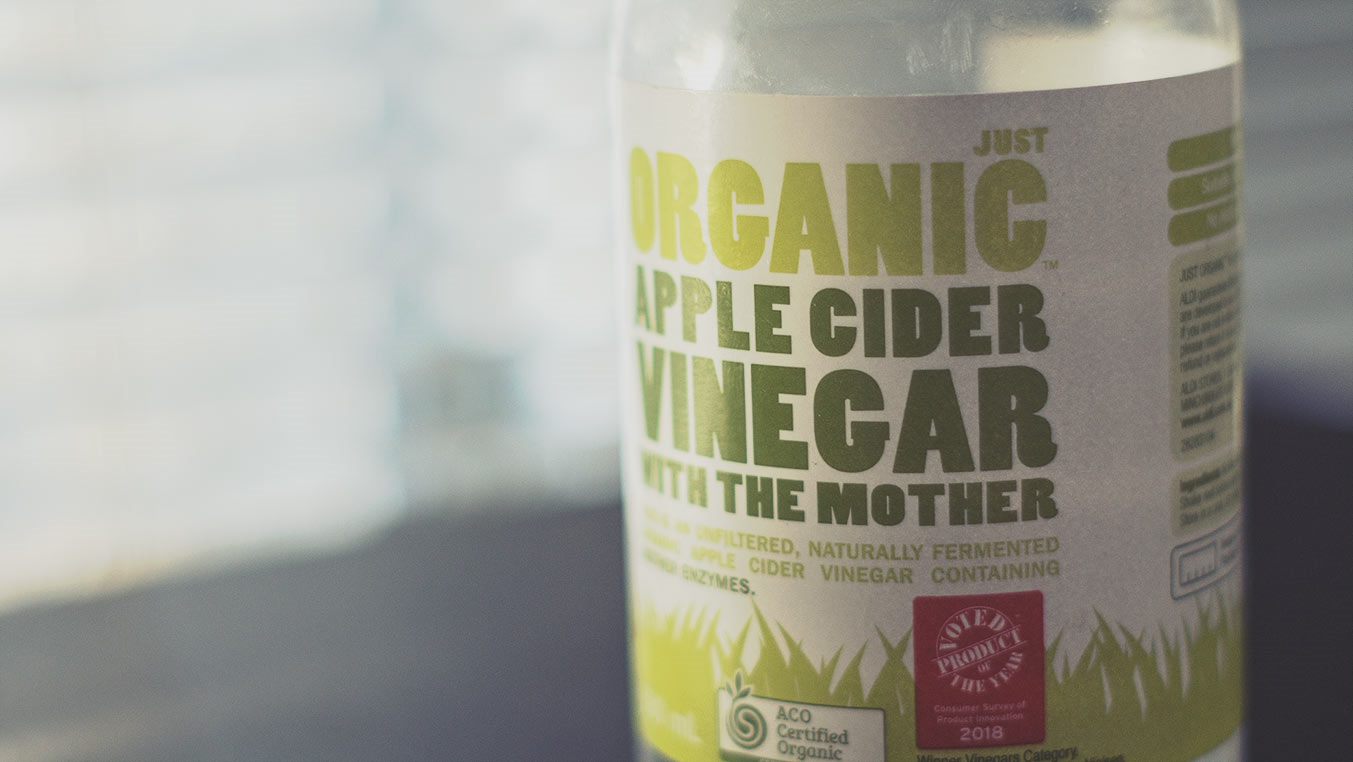 If there’s no milk, no soy sauce, or no stocks – consider Apple Cider Vinegar. For year/s – ALDI® ACV convinced me as my go to brand @ $3.30 for 500ML for every 3.25 weeks supply. Spoon through one tablespoon amount and marinate as is.

I recommend marinating this no longer than few hours before serving or otherwise it just plainly stank of sour pungentness, to avoid excess pungentness & that vinegarish palate -I’d wager you could try turmeric (more affordable), or rosemary, basil and/or oregano to help quell it to some degree.

This works well if combined with minced garlic and soy sauce. Coconut cream is both a versatile and affordable source of saturated fats in place of sadly inflated price of common butter. I’d personally avoid budget Coles® branded 90 cent coconut creams as that is laden with all sorts of thickeners disguised in synthetic laboratory code/s. Instead go for Woolworths® same priced as it contains nothing but 80% coconut extract + water.

I would not waste my time with coconut milk. It is simply not enough fat to justify its use towards any cooking. A sad industrial failure of modern food production.

Simply pour through up to two tablespoon of coconut cream after the above reconstitution alongside with soy sauce or just additional spices, and let marinate in fridge for up to few hours. Beware however, that most coconut creams by themselves will go off in the fridge within six days cold storage (though it can be prolonged via freezing). Hence be sure if you are marinating with coconut cream it is well within this six day ideal period window of consumption. 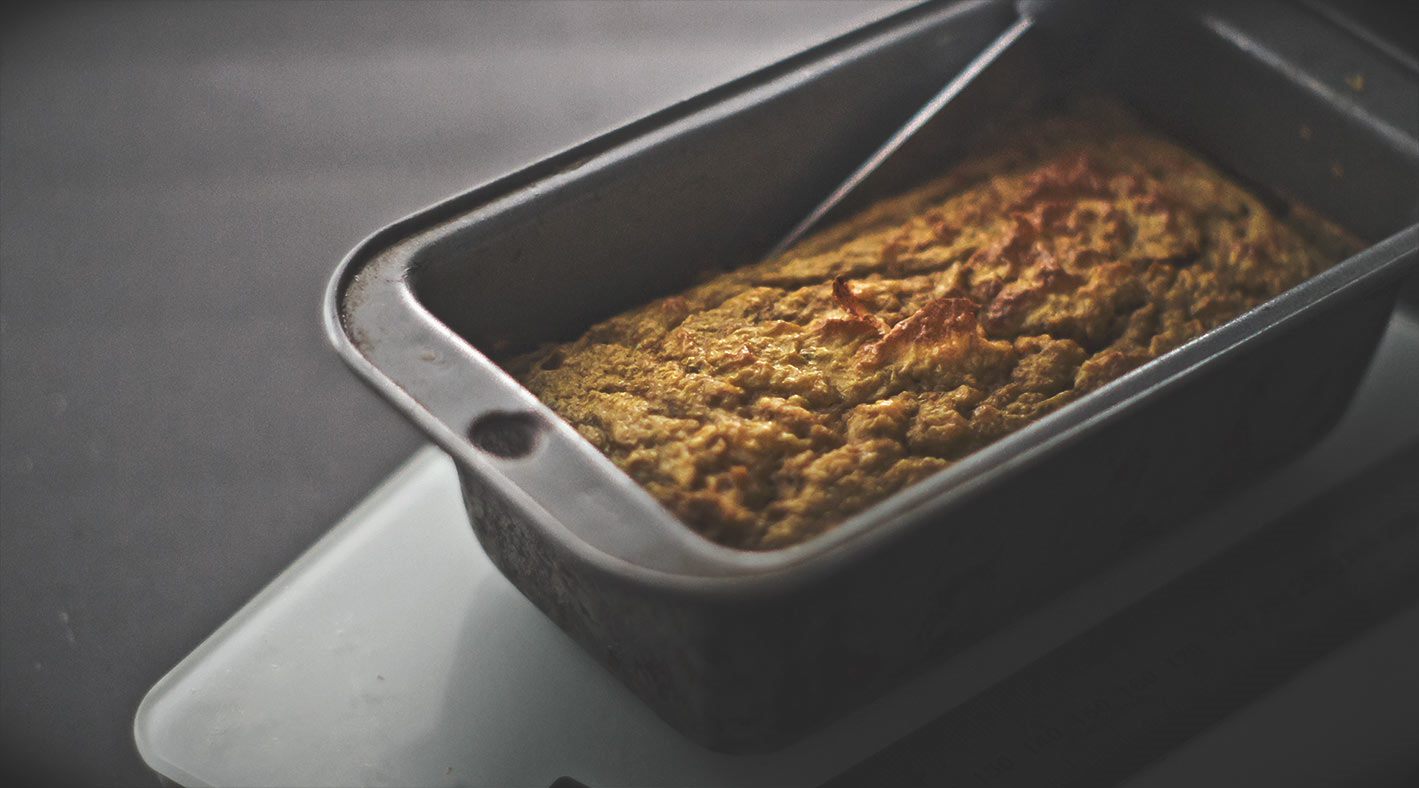 Alternatively, make it a part of baked meat loaf recipe.

Similarly as per the Pea Protein meat loaf – you could try baking it with pea proteins (if they’re in short supply too). Of all the methods – this one I believe is the best so far due to the Pea Protein’s neutralising flavour, even if mixed in ratio towards TVP dominant. The downside is obviously its resource-intensive demands (pea protein isolates, various condiments, spray oils, and most importantly – precious eggs).

Instead of using 60g of pea protein isolates all at once; try splitting into two halves. 30g pea protein isolates and 30g dry TVP. Reconstitute the TVP as per to the earlier described instructions.  Then add the remaining ingredients (2 eggs, tablespoon of apple cider vinegar, minced garlic, turmeric, 2x finger pinch each amounts of baking soda and cream of tartar)  to the food processor. Blend until thick sludge-like consistency.

Bake in a 190 deg c’ preheated oven for 30 minutes on a small baking tray (with cut baking sheet resting inside) sprayed with a non-gmo canola spray. Check via knife poke test and cook for another 15 mins on 100 degrees. Once done, knife along the edges, gently tip it out, cool for bit, serve or store.  Macros are more or less the same to that if you’re using straight pea protein isolates. So now that your needs for prepping and marinating is done. Time to remind ourselves some background lessons.

For me to remain humbling for not copying off what the Internet already knows – I’d invite you to read Evolving Wellness’ post (by Evitta Ochel). From top to bottom. Do not skim. Decide and determine whether eating TVP feels “right” for you.

Now the next part of this question comes to”where or how should I get them”. The answer is thankfully, a lot more feasible especially if you live in Perth, Western Australia. If not, I’d encourage you to scout major wholefoods establishment stores (here we have Kakulas sisters / bros) anywhere surrounding your suburbs. Sports and natural health food stores may also help you to find local sources or grocers distributors.

One thing to note however – that they are at times labelled differently. Sometimes “Total”  as opposed to “Textured”. They may also be labelled as T-S-P (textured SOY protein). In Perth Western Australia – Kakulas Sisters® grocers label them as “Total” but everywhere else, including an online grocer store 2 Brother’s Foods / aka “The Postal Almond” =  it remains officially labelled as “Textured”. But within the actual brand’s product sheet I courteously requested back in 2016 – it is described as Textured SOY Protein.

TVP is mostly macro-divided into 50/35/15 ratios – protein first, then fibre and then the effective net carbohydrates. It is virtually free of fats although counted as 1 gram per out of 100 grams of uncooked, dry weight.

Below are tables for 100 grams dry, uncooked, unreconstituted weight. What I have used (2 Brothers’ Foods) alongside with the product specification sheet (kindly provided upon request) seems very identical to Bob Mill’s in terms of protein content and dietary fibre, except the 2 brother foods carry slightly more carbs (33 grams per 100g) yet interestingly less sugar (7.8 grams per 100g) and slightly less overall calories (-16 cals).

Each 60g batch as perusing the above reconstitution methods equates to two servings. Each serving (about 90-100g final constituted weight) equates to 90 to 100 calories, 15 grams of protein, 8 grams of carbohydrates but 5 of which is fibre.

Whilst no doubt I agree that potassium is a critical mineral next to magnesium, beware however that too much is just as dangerousy confusing – as being deficient produces the same side effects. From heart palpitations, tightness, etc. Further reading is advisable especially if you live with / amongst those prone to kidney problems or prior history of heart complications.

Here in Perth, Western Australia – TVP is priced between $5.50 to $7 per kilogram. That is, if you buy locally from whole grocers such as Kakulas Sisters®. Alternatively, or order it through 2brothers foods.

One kilogram of TVP equates to anywhere between 25 to 30 serves yield. Each 30g (dry unreconstituted weight) serve would thus cost on average 20 cents each. The recognisable brand (Bob’s Mills) however, in my opinion – is still poorly accessible and excessively cost-inflated.

No, I am not sponsored, nor paid or endorsed; should anyone suspecting me as a shill to work for any of these brands.

Do you have any others you wish to add? Please comment down below!