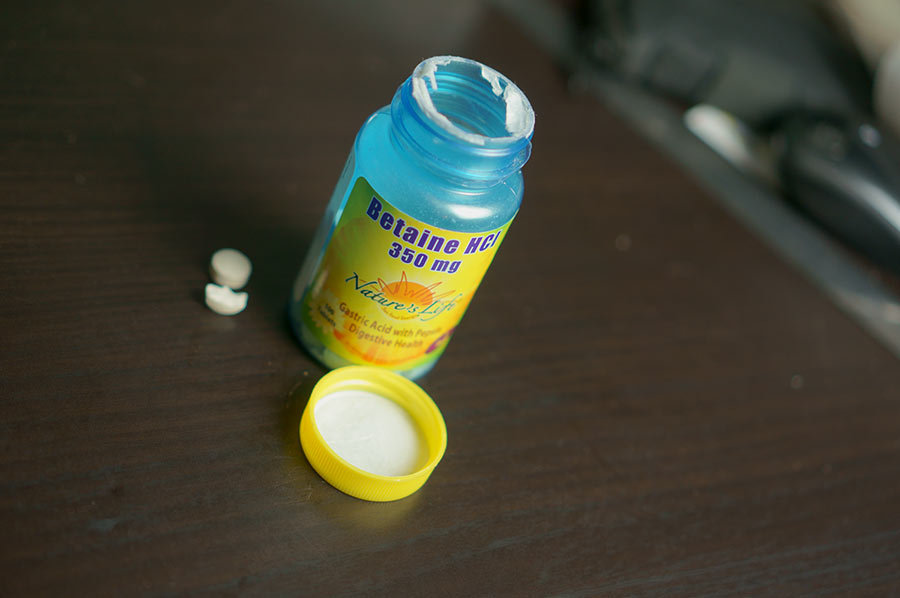 When it comes to “Supplements” in any health wellness blog, almost any pedestrian would assume the author must be an absolute figure of authority in such use and/or praise.

I am “shy” however, when it comes to portraying such ego. Due to increasingly flux of Internet SJW’s, thought-polices, and their moral pitchforks – I’ve been keeping this quietly so to speak.

Or technically known as TMG (Trimethylglycine). Usually accompanied by Pepsin (“πέψις” /pepsis / “Digestion”). These have been the forefront / focus for nutrient partitioning. Protein, amino acid digestion, utilisation, uptake, then all the way to numerously complex and ornate biochemistry – Methylation.

This article is only contemplative not prescriptive. Those who need detail requires very nuanced understanding of Methylation. “Methylation” itself ~ is never an easy subject for anyone to grasp. Because it shares Biochemistry (molecules, biomolecules, macros & micros) and Neuroscience (neuropeptides, transmitters and brain health). Hence by no means this article is an “Authoritative” figure of reference so to speak. This is simply a sharing of cliff notes of various research and studies. You are encouraged to find and curate your own research. And at best ~ self-enquire all supplementation strategies in periodical dosages between none, habitual or high. AW™.

Another disclaimer ~ This is not a permission for anyone to go all out on massive dosing of Betaine or Betaine HCL+Pepsin. Please consider the following starter points:

Back ever since many years (even before my standard Standard Keto early days back in 2014-2016) ~ I always had lingering feelings of unease, inflammations and/or just general feeling as though food – almost any solid foods – did not “sit” nor settle as they should be. I always thought it’d be a matter of stoicism. Man it up. Little do I know all this is damage, all along

So I started my own nutritional journalling. Put my curiosity put to the test against the undying  status quo ~ “Acidity is bad, period.”

Betaine HCL + pepsin ~ was a revelation. For many years that pass, my reliance on these gradually reduced to almost none. Except in few circumstances whereby much higher calorie feedings or mixed macro re-feeding scenarios are anticipated.

Over the years of SKD and now CKD+IF ~ I used to have persistent reliance on these. Thankfully, physiology corrects itself overtime. This is also attributed perhaps that I also became more critical in my choice of foods during refeeds. As well ~ maintaining other arguably-crucial, supporting micronutrients for digestion health. Namely, Zinc, Magnesium, Vitamin D, K2, COQ10 (only occasional) & Creatine.

So what “products” or “brands am I taking?

I would not recommend, unless you’re pocket rich ~ the DIY crystal powders approach. This requires you to not only buy a mini/micro capsule filling station ($15-$25), but also need to buy the gelatine capsules. The size I used for this as I best approximate on dosage is “Size 3” as I best recall.  And also obviously ~ I had to buy the pepsin powders separately ($15-$25).

The amount of time and labour it took me, from memory (as I did not have a proper filling capsule station) ~ was almost not worth it. But, for those who plan to really go all out on DIY supplementing the capsule filling station + outsourcing your own gelatine capsules may yet be cost effective if you also are DIY’ing many supplements. Especially in huge quantities / amounts.

But for the everyday pragmatic user. There’s always other priorities. Namely “food”. Before you ask, no I am not “paid” by anyone.

A first general stop would be Examine.com’s excellent article on TMG.

Otherwise, much of what I provide here is only a sharing of noteworthy passages / findings  from studies that surrounds the general importance(s) of acidity for strong and able nutritive health. Not just praiseful claims from direct use of Betaine HCL /  Pepsin. These are categorised into four (4) categories: Digestion, Viral Infections, Psychological/Psychosocial and lastly Metabolic Markers.

“Numerous studies have shown acid secretion declines with advancing age. The resultant rise in stomach pH can have a detrimental impact on nutrient absorption and may increase the risk of a variety of clinical conditions.”

“After being told I had IBS when several tests came back normal, I was determined to find the cause of my gut issues. The most valuable information and guidance came from working with my functional nutritionist. I can now live my life normally with no worries that I will have pain after I eat. After 2 years of mystery pains, I am pain free. I am forever grateful.”

“Low HCL levels in the stomach occur frequently in the elderly, in people with some types of stomach disorders, and when any of several types of antacid drugs are used. This low HCL can prevent minerals from separating from food or supplements. If mineral separation has already occurred, low HCL can allow the minerals to recombine into compounds that are difficult to absorb.”

Gerber, J.  A Review of Mineral Absorption with Special Consideration of Chelation as a Method to Improve Bioavailability of Mineral Supplements.

2/4 Viral Infection from lack of acidity

“According to the Textbook of Functional Medicine, low stomach acid predisposes one to the growth of H. pylori and is also linked to SIBO and inadequate Vitamin B12 absorption. It’s also noted that low levels of vitamin C, and vitamin E in gastric fluids promote the growth of H. pylori. And while there aren’t decisive studies showing that H. pylori is the direct cause of heartburn and acid reflux, there is an implied association there.”

“If low stomach acid is a prerequisite to H. pylori infection, we might expect acid suppressing drugs to worsen current H. pylori infections and increase rates of infection. That’s exactly what studies suggest. Prilosec and other acid suppressing drugs increase gastritis (inflammation of the stomach) and epithelial lesions in the corpus of the stomach in people infected with H. pylori.”

The Japanese seemed to have many incidences of stomach cancers.

“Histologically, gastric cancer is classified as either “intestinal” or “diffuse”. Intestinal cancer is commoner and is associated with atrophy and IM while diffuse cancer tends to arise in areas of active inflammation. Both are strongly associated with H pylori infection….Cytokine production is largely responsible for the host’s inflammatory response to H pylori infection and is genetically determined. Interleukin (IL) 1β and tumour necrosis factor α (TNF‐α) are proinflammatory cytokines that also inhibit acid production.”

G M Naylor et al.Why does Japan have a high incidence of gastric cancer? Comparison of gastritis between UK and Japanese patients.

“Potent acid suppression has long been suspected a risk factor of gastric cancer by worsening gastric atrophy with ensuing hypergastrinemia and bacterial overgrowth in the stomach….During a mean follow up of 6.9 years, PPI use was associated with an increased gastric cancer risk (HR 3.61; 95% CI 1.49–8.77). Such an association was only observed among patients with intestinal metaplasia, indicating PPIs potentially increase gastric cancer risk in patients with pre-existing gastric precancerous lesions.”

Cheung K S, et al. “Long-term use of proton-pump inhibitors and risk of gastric cancer: a review of the current evidence.”

Many years ago throughout 2008-2011 – I was reliant on “S-AME” or technically elaborated as  s-adenosylmethionine supplementation. Mainly for its anti-depressive effects and anti-joint pain during mid workouts. It appears that TMG is the required cofactor.

“TMG has been proposed as a treatment for depression. In theory, it would increase S-adenosylmethionine (SAMe) by remethylating homocysteine. The same homocysteine-to-methionine result could be achieved by supplementing with folic acid and vitamin B12, methionine then serving as a precursor to synthesis of SAMe. SAMe as a dietary supplement has been shown to work as a nonspecific antidepressant.”

“Excess cortisol not only reduces the production and secretion of hydrochloric acid (HCL) , an essential piece to the signals being sent down the tract, it also compromises the body’s first line of defense, secretory IgA (ie. your immune system)….Remember, from an evolutionary point of view, stress is the body’s signal to run like hell and digestion is not a priority when running for your life.”

“Just as hypothyroidism can result in the drying out of your skin and hair, it also seems to lower the levels of stomach acid in many thyroid patients, possibly by lowering your amount of parietel cells or lowering their ability to produce gastric acid, aka hypochlorhydria.  The result?  The absorption of important nutrients is reduced, and you can find yourself with non-optimal or low levels of iron, B12, Vitamin D and more.”

“Diabetics with high fasting blood sugars (FBS) require a much greater dose of insulin, compared with nondiabetics, to obtain the same critical hypoglycemic level or again the gastric secretory response will not become manifest. “

Betaine HCL Pepsin has been an eye-opener, at least from my own N=1 account and history. I stress this is still a matter of individual introspection. That Betaine HCL+Pepsin certainly is not for everyone persistently in long term. As long term research as I am aware is not easily found thus far.

The question that remains is what happens if we do not have the money? In my manuscript I’ve suggested various alternatives although sadly these still must constitute additional finances as follows:

Very rarely if ever – do I put out thoughts on supplements like this.  Because I do not proclaim my own N=1 ~ to be the irrefutable gospel ~ as boldly as what many anticipate amidst health / wellness spheres .

Nevertheless, I hope all the above helps provide you informed consent ~ for N=1 self-enquiring / nutritional journalling.